My Life in Pictures - Hurricane Odile

I'm not sure if my blog is still on anyone's reading list, it's been so long since I've posted anything. Blame it on Hurricane Odile, which roared (truly!) through our town on September 15th and knocked out all the services, including internet. Everything else was back up and running within a week EXCEPT for the internet connection to parts of the town (including our house), which was finally restored two days ago - a mere month and a half later!

So here are some photos of Todos Santos in the aftermath of Hurricane Odile.

The only real damage to our house was the loss of the palapa over the patio upstairs: 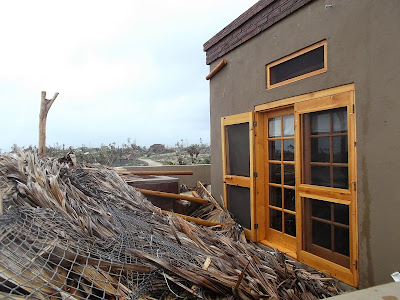 We also had some flooding, particularly to the upstairs bedroom (!). Part of our fence was blown over and most of our gates took it on the chin and had to be replaced. However, that was nothing compared to the damage to many of our neighbors' houses.

This is the house across the road from us, one of many that lost their roofs. 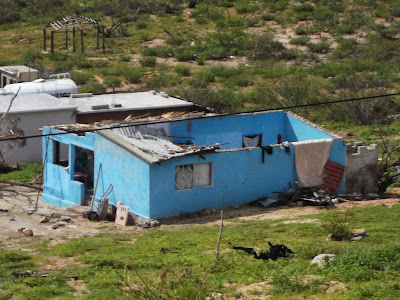 Some of the family's clothes and bedding are draped over the wall to dry.

These were typical scenes around town. The amount of biomass to be cleaned up was overwhelming! 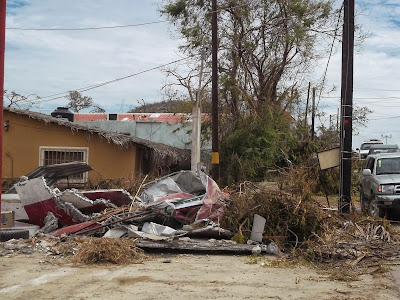 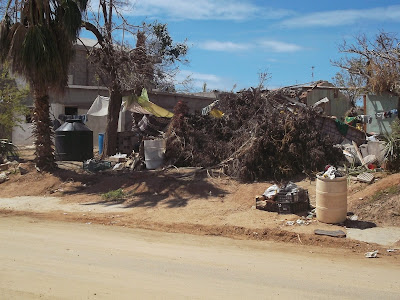 The Mexican government sent in their version of the National Guards to clean up and it was a HUGE help - our town would still look like a mess if they hadn't come. 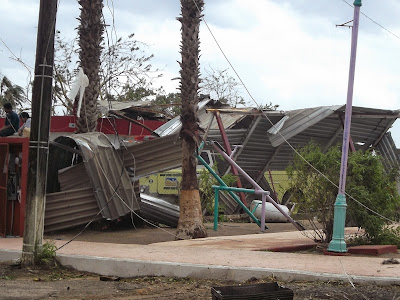 Some of the firemen (all volunteers) stayed at the firehouse during the hurricane to be available to help with injuries (they also are trained in basic medical care). I heard of one man who had to be taken down to the firehouse in the middle of the hurricane (which happened at night) due to injuries.

Here's the electric company building. We had been waiting for them to come out and set up a new electric service for our vacation rental house, and they were scheduled to do that...on September 15th, the day that the hurricane came to town. Of course all their records were lost (computers & everything, gone) so we're still without the new electrical service at the rental house. 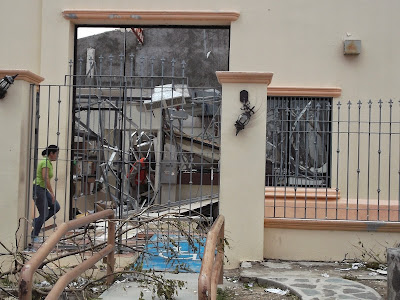 They are now operating out of a trailer set up at a small plaza in town.

The roof of the largest grocery store in town blew off and the entire front collapsed. There was no looting, however. People guarded the store and workers were brought in quickly to repair it. 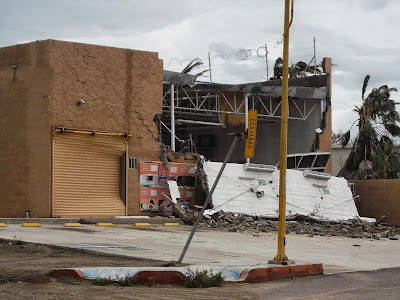 This is the school at the end of our street. All the walls surrounding it fell down (as did many in town). 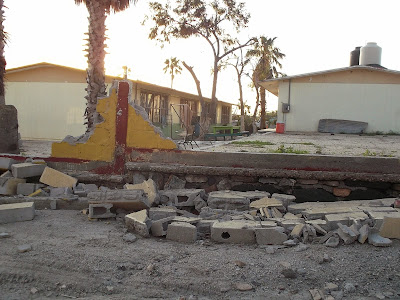 A "soup kitchen" was set up in the school after the hurricane for residents who were without food and it operated until the school was reopened 2 weeks later. There is still a lot of damage to the school campus that has yet to be dealt with.

There are still many homes without roofs and much damage to be cleaned up. A couple of the local charitable organizations have stepped up and are providing a means for Americans to donate money for materials etc. There are teams of volunteers working on getting homes liveable again. Here are a couple of links if you want to donate:
http://www.gofundme.com/eskrns
http://www.todostortugueros.org/hurricane_odile_disaster_relief_todos_santos.html