I've lived in some awesomely beautiful places, but the one which captured my soul is La Honda.

I love the chaparral. The combination of the live oaks and golden grass is, to my eyes, enchanting. I have lived in a redwood forest, on a hill overlooking San Francisco, on a creek (literally!) under bay trees, and now in a desert oasis with an ocean view. But to have had the privilege of living in the chaparral, surrounded by quail and mourning doves, red-tailed hawks and bobcats (and even the unloved banana slugs and deer), ah, that was as close to what I hope heaven looks and feels like!

I am editing a textbook on financial therapy while listening to Alisdair Fraser, a Scottish fiddler transplanted to the Bay Area, and the sweet memory of my beautiful La Honda is piercing my heart.

We lived there for 11 years and moved because, as has always been the case, God drew us toward something more wonderful. Not more wonderful in its ambience, but certainly in spiritual richness.

Poor beautiful La Honda! There were, I think five or six christians in the community of about 850, and of course we all had different doctrinal beliefs. We became good friends with a couple who were basically Baptist, and met with them weekly just to hang out and encourage them in the faith. We worked together in running the community food distribution service to the poor of the area. But for much of the time we lived in La Honda we weren't part of a church community, since the nearest one was half an hour away on winding country roads, and we couldn't quite figure out how to do community with them, since we didn't live in their town.

In several of the other places we have lived we didn't really know our neighbors (a curse of many urban and suburban areas). It wasn't the case in La Honda, however. We knew everyone on our street (two blocks long), and our lives intertwined in various ways with all of them. It was a real community. When you went for a walk, which a lot of people did, anyone you passed would greet you, whether they knew you or not. There was a restaurant which functioned as the community gathering place. It was one of two businesses in the community, the other being a grocery store. Everyone had to go to the post office to get their mail, since there was no mail delivery available. Ah, the sweetness of a rural life!

On my way to my studio at the bottom of our property.

I served for 6 years on the guild board, which was the governing body of the community. We dealt with the cranks and the deadbeats and the down-and-outers and the ones who wanted to improve things. Over the time we lived there, the community demographics changed. By the time we left there were far fewer deadbeats and many more professionals, which made for less contention but also made the ambience less rich.

I am SO grateful to God that He brought us to Todos Santos, to the Catholic Church, to a culture where family is central and people support one another. The sense of community is fundamental here (among the local Mexicans, anyway; I can't speak for the gringos because I don't know many of them). There are a lot of walkers here, too, mostly due to lack of the financial means to own a car. But I am most grateful for the heights, the depths, the riches of the Catholic Church which was His greatest gift to me in having to leave behind my beautiful La Honda, which will pass away, but His church will never pass away; we are married forever to our redeemer and the lover of our souls, the one who created all the beautiful things of the world and delights in them all. 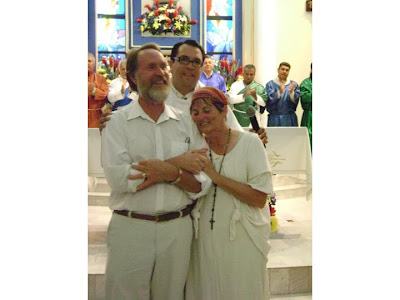 Confirmation of our marriage vows on entering the Catholic Church.