From An Unexciting Life

This post is one of a series on passages from the book. You can read the others by clicking on "an unexciting life" in the list of topics on the right side of this page. I've read a LOT of books over the years that are meditations on the holy life - both Catholic and Protestant - and this is my favorite.

FROM THE CHAPTER "Strangers to Worldly Ways":
"Attention to the things of God leads us to tend the needs of our brothers and sisters. Hence [we are reminded] of our obligations to the poor, the needy and the unwell. By offering ourselves in service, by putting ourselves out for others, we are freed from the domination of our own immature need for comfort. This has always been one of the puzzles of the Christian way: why is it that a person makes greater progress on the way to God through self-forgetfulness and service than through teeth-gritting determination?" 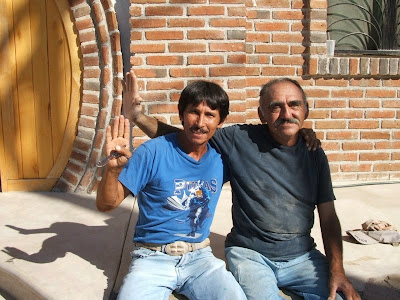 The man on the right is a neighbor who has a profound mental disability and is unable to speak intelligibly. Everyone calls him "Jefe" (boss), and he is a fixture at the neighborhood gringo cafe, where he sits on the steps and waves at everyone. He is watched over by the Mexicans in the neighborhood, who treat him like a family member. He attends mass at our neighborhood chapel and shakes everyone's hand as he goes up to receive communion.

I think we would all be mucher richer for it if we all had a "Jefe" in our neighborhoods, someone whom we can't ignore because he hangs out at our local cafe or grocery store. Someone who needs the whole neighborhood to make sure he's okay, getting enough to eat, not getting run over because he doesn't know not to walk in the middle of the street. In the US the strategy has been to keep the sad, broken, desperate people as far from our view as possible. But WE NEED THEM! We need them in order to be fully human ourselves.

FROM THE SAME CHAPTER:
"[Let us consider] the monk's reactions to the fact that the ideal life is rarely achieved and the consequent existence of conflict, disharmony and even violence. His response is a generous, unflinching patience - quite at odds with the anticipated secular response to being victimized. He does not return evil or initiate it. He bears it patiently and loves his enemies." Our culture, among other distortions, has elevated victimhood to an exalted position. This, of course, keeps many lawyers busy but it does nothing to strengthen society, which depends on people taking responsibility, not only for their own actions, but also for their own responses to the actions of others. Think of Saint Maximilian Kolbe, or Blessed Titus Brandsma, or Corrie Ten Boom - all put in German concentration camps, two of whom died there. But their lives testify to non-victimhood. They all were exemplars of love conquering evil. And of course there are many such stories (if you have a favorite, please leave me a comment with the name or names of people who showed the same refusal to be victims).

I take comfort from these paragraphs because there are so many examples of people who have lived in service to others with self-forgetful love. It is possible to be a saint! And it's clear that even in the face of extremely stressful circumstances, people who put the well-being of others before their own are given the strength and joy that we all long for. As our former priest used to say to everyone about everything, "animo!" Take courage! Be encouraged! And give encouragement to others...
Posted by Unknown at Friday, May 16, 2014 3 comments:
Labels: an unexciting life

In the US we have Mother's Day and Father's Day. In Mexico we also have Children's Day: El Dia de los Ninos, which was last Wednesday, April 30th.

Our priest wanted to do something special for the children in Meliton Albanez, the small agrgicultural community served by our parish, so we had a Children's Day party for them on Friday. My friend Teresita coordinated the making of 250 chicken salad sandwiches, and other people in our parish brought jello and several large sheet cakes. 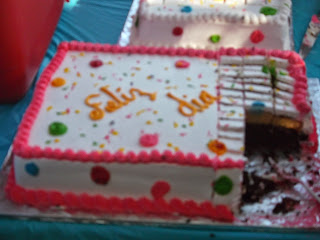 Padre conducted the mass with songs that included lots of clapping, and his homily was focused on how much God loves us. He led the children in a time of naming all the things we're thankful to God for (we're healthy! we can read! we have enough food! we have mothers and fathers!). 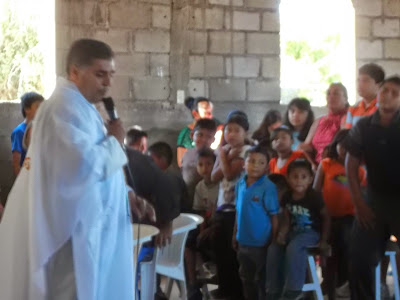 The party was held right after mass, in the area surrounding the church (a dirt lot). 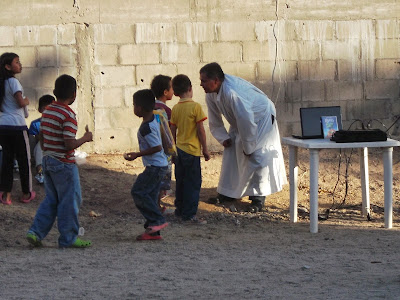 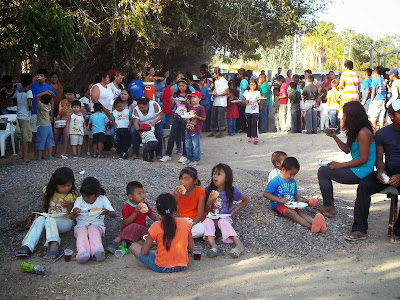 There were enough pinatas that all the kids could participate: 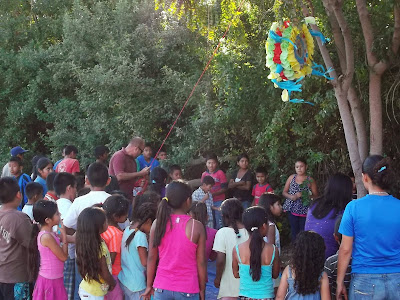 and get plenty of candy: 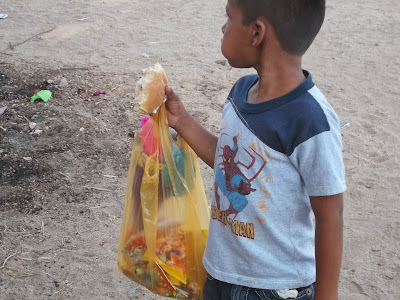 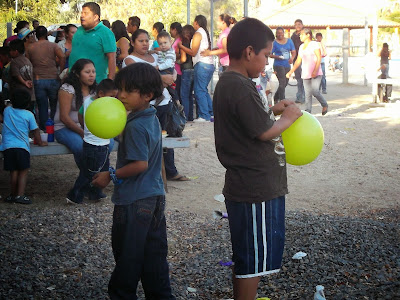 All the food was eaten - there was none left! 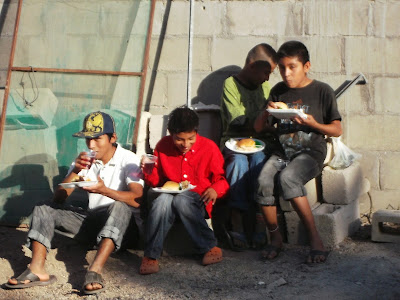 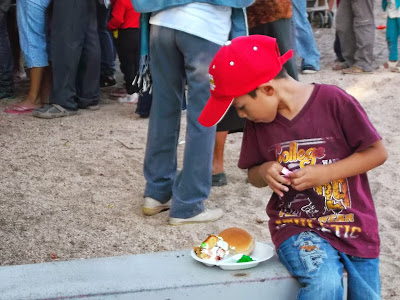 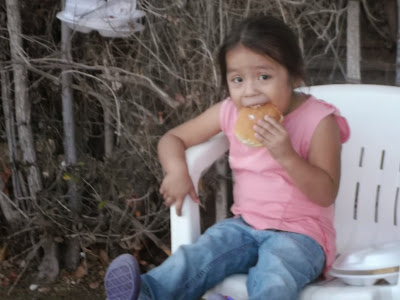 Then we showed a movie in the church (Rango - in spanish, of course). 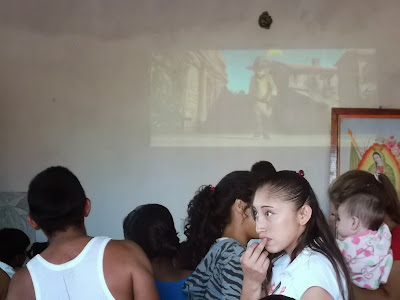 While the movie was being shown I picked up the remaining garbage. A lot had already been done by several adults, but there was a lot more! Several of the girls left the movie and asked if they could help, which of course I gratefully accepted: 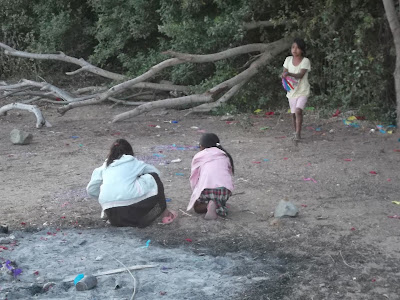 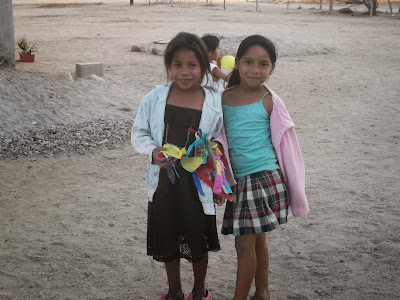 As a grand finale, Padre brought HUGE boxes full of new shoes so everyone (maybe 150-200 kids) could have a pair. I don't know where he got them, but it was definitely a highlight for the kids to each get a new pair of shoes. 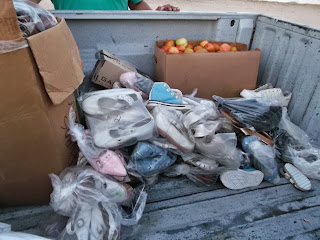 After taking the chicken out of the HUGE pot it was cooked in, put the celery (in batches) in a strainer and submerge in the chicken broth for a couple of minutes to soften it. Do the same with the potatoes, chayotes and carrots. Then re-chop all of them very fine. Mix thoroughly along with the poblanos in the most humongous pot that you can find.

In another giant bowl, mix a huge amount of crema (or mayonnaise if you have no crema) and prepared mustard to make about 2 gallons. Mix this into the chicken/vegetable mixture.

Cut 250 bolillos (mexican rolls, soft and sweet) in half. Spread the chicken salad on half of each bolillo, top with the other half & wrap in a paper napkin. Repeat 250 times.

The proportions are unimportant. The result is REALLY tasty because the poblanos put some zing into it (and of course the bolillos are heavenly!). It took us 4 hours to cook and chop everything and 1 1/2 hours to assemble the tortitas (little sandwiches). I didn't take any pictures of the process because I was too busy chopping and assembling!

Here's a photo of Teresita (on the right) and another friend, Blanca, who I helped in putting together the food: 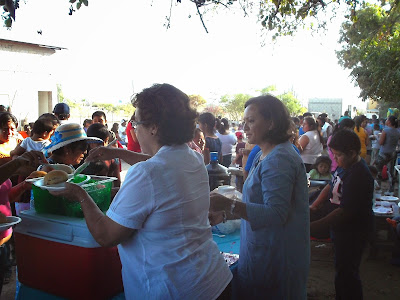