On Palm Sunday we welcomed 75 kids from Guadalajara who are here on a short-term mission trip. They will be doing activities with the children of our parish as well as with our youth group, and even more importantly, providing classes and activities for the congregations of the ranchos and small communities surrounding our town, which are sorely lacking in such things. 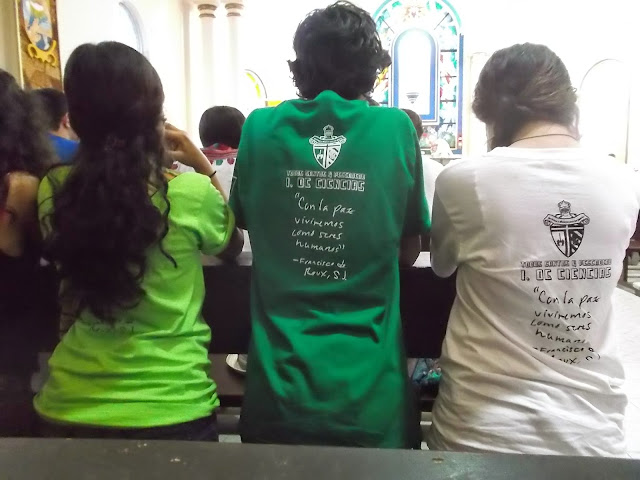 This is the second year that a group from the Instituto de Ciencias (a Jesuit preparatory high school) has come to our town for Semana Santa (Holy Week). Last year, the t-shirts that they wore, and that many of our people received, noted that it was the 330th anniversary of the arrival of Jesuits on the Baja Pensinsula to found a mission in Loreto. That was the first mission in the whole chain of California missions and the Jesuits founded more than 20 others on the peninsula, including our church in Todos Santos, before the King of Spain kicked them out of Mexico due to envy (after 150 years here). Here's a photo of the altar of the old mission part of our church, which for decades has been used merely as a passageway to get to the larger sanctuary. But our current priest has started using it for the weekday masses and baptisms, and we dedicated it to the new purpose a couple of days ago with a special blessing after the regular mass. 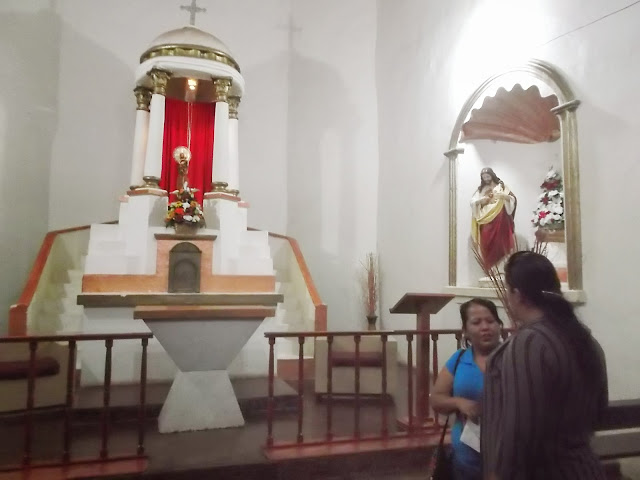 While our parish was preparing for this group to arrive, I realized that most of the members of my family have been on short-term missions trips. In fact, everyone over the age of 14 has been on one or more……except me! I have never had that particular adventure. Ah well - my life has been full of excitement and challenges anyway.

Yesterday was, of course Domingo de Ramos (Palm Sunday). Here are couple of photos of the group that did a procession through town to the church, including all the kids who were going to have their first communion that day: 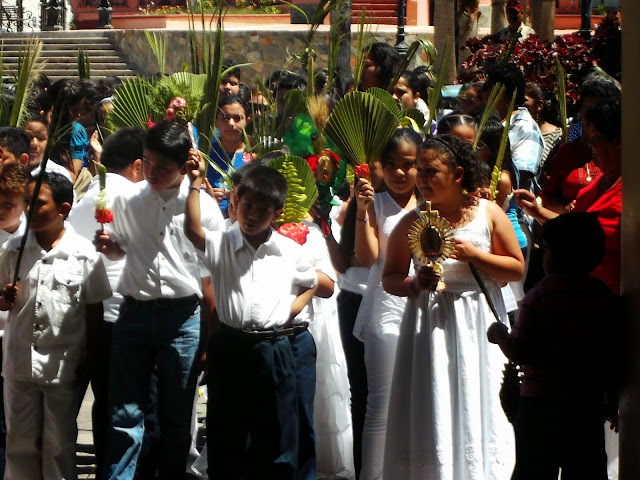 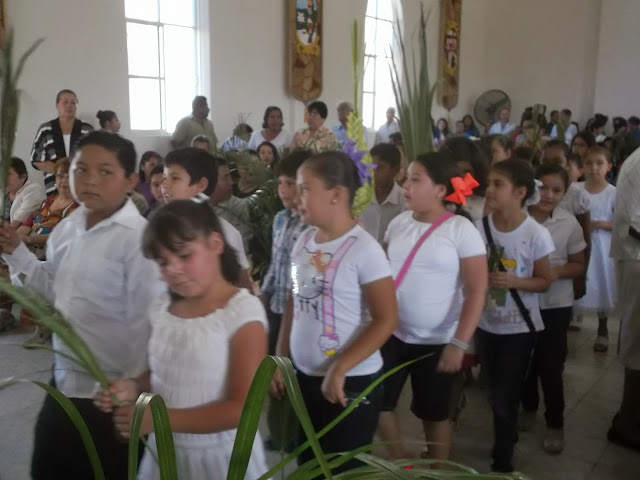 Of course the church was beyond completely packed, but what joy! We've got lots of activities happening this week leading up to the Easter Vigil mass on Saturday night.

And for something completely different, my young arbol del fuego (tree of fire - the spanish name for a tulipan) just bloomed! This is the third year since I planted it, and it put on a beautiful show for us. 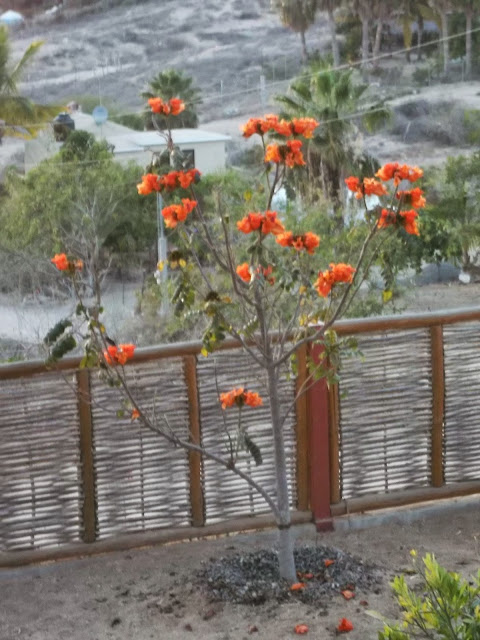 I hope your Holy Week is as expressive of the fire of God's love as this tree is!
Posted by Unknown at Monday, April 14, 2014 7 comments:
Labels: Catholicism, church, Todos Santos


From "An Unexciting Life"

For past posts on thoughts from this wonderful book, go here and here.

HERE'S THE PASSAGE I'M REFLECTING ON TODAY:
…we need to become free of the pleasure principle. Thus we are called on to practice fasting and more, to love it - really to appreciate that the way of the desert is a good and noble thing. To walk it is not an achievement but a privilege and a gift…There is no question here of masochism nor of a mindless puritanism, but a clear assertion that if the monk is to make his way to God he needs to disembarrass himself of whatever will slow him down and will have to be abandoned eventually in any case.

As has been said many times by many holy people, we need to empty ourselves so God can fill us up. That's what fasting is about. And it's a challenge to cling to that purpose, because (at least for me) my carnal nature wants to make fasting into a way to lose weight. But if I allow that thought to have any place in my fasting times, I lose the reward that God has for me, much as Jesus warned us in Matthew 6.

If, when I feel those hunger pangs, I am reminded to pray for the people or situations that God has given to me for that purpose, I am being a co-worker with God. If, on the other hand, I have allowed the idea of weight loss to enter into the equation, when I feel hunger pangs it's pretty easy to tell myself that a little "something" can't possibly make any difference. And maybe it won't, on a physical level. But it will rob me of the joy of working alongside God in establishing His kingdom here on earth as it is in heaven, because I have lost my opportunity to be united with Him in sacrifice for his people.

This Lent has been a particularly challenging one for me. I'm thankful that I didn't set any high goals for myself since God has seen fit to provide many small and large tests for me this season. But testing is the point of Lent - are we capable of holding firm? Of clinging even more strongly to our Father in the midst of the storm?

I hope that I am learning how to be more realistic in my fasting. My tendency has always been to do total fasts (no food at all and only one or two glasses of something liquid in a 24 hour period). But God has been gently reminding me that the key to fasting is the turning of the heart to prayer instead of food, and that my test is in learning how to eat LESS rather than NOTHING, offering Him the sacrifice of that harder discipline (why is it harder to be moderate than it is to be radical?). And of course, to be consistent in prayer.

What is Lent? It is following Jesus into the desert - letting go of our "right" to a comfortable and secure life, voluntarily uniting ourselves with Him in the sacrifices He made for us. 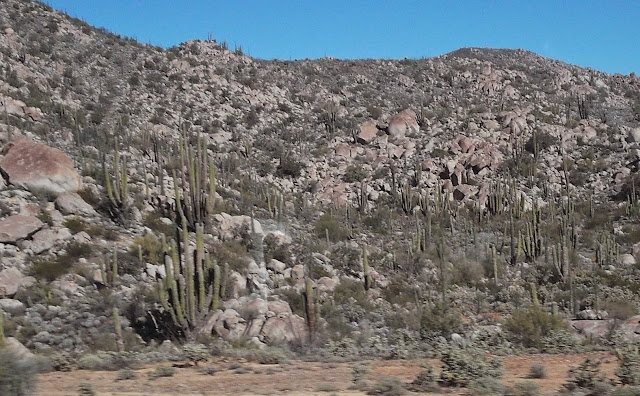 Nuthin' much - what's new with you?

Well, we went up to the States for a couple of weeks and I figured that it was a good time to focus on being with people rather than blogging, so that's why you haven't seen any recent posts. On the way up to our family place in Mendocino we stopped to visit a blog friend (now a real-life friend) - Gretchen of Gladsome Lights. We had a lovely lenten lunch with her and her husband and discovered connections that go back over 30 years!

Then when we got home, there was so much going on in my real-life community that I didn't have any motivation to devote time to the virtual community. And I have to say, this break has caused me to reflect (again) on my purpose for blogging. I originally started my blog - only a year ago - to create a closer connection with my family in the US, and especially (I hoped) with my grandkids. I thought that blog posts might be a good way to share what's going on in our lives in a fuller way than can be done with occasional phone calls.

I don't know how effective my initial purpose is, since the only indication I have that any of my family members read my posts is that one of my daughters-in-law told me that she often reads them to her kids in the mornings.

I hope those long-time friends of mine who know about my blog read it, at least occasionally, although none have ever commented on it, so maybe not.

Meanwhile, of course, I developed some online acquaintances - people who occasionally comment on my posts, people for whom I pray on a regular basis. But I realized that if I want to strengthen my connection with them the most direct way to do that is to leave encouraging comments on their blogs; having a blog myself isn't necessary to be an encouragement to others.

I recently realized that to some extent I had been engaging in "competitive blogging". Not competitive really, but trying to keep up with the many bloggers who write daily posts and participate in all the neat linkups. But as I think about it, a more natural pace for me would be to do occasional posts with random periods of silence. None of the people I love have ever gotten daily or even weekly phone calls or emails from me; why should I feel that it's important to do daily or weekly blog posts? I think about how delightful it is to get unexpected emails from friends, and how easy it is to blow off the emails that come from the same source every week.

So this is my declaration of freedom from consistency in blog communication. If you want to keep in touch with what's going on in my corner of the world, I'll stay in touch through whatever method you've set up to get my posts, but not every week. I'm not going to stretch for interesting things to write about as though I'm writing a travelogue. I'm going to keep the focus on things I want to share with my family and dear friends (and anyone who might want to read over their shoulder).

And to reward you for having read this far, here's a mesmerizing video of art done on clay while it's spinning on a potter's wheel.


PS It's raining! Here in the desert! In April! (the lifelong residents say this has NEVER happened before).
Posted by Unknown at Friday, April 04, 2014 6 comments:
Newer Posts Older Posts Home
Subscribe to: Posts (Atom)