It's time to collect my thoughts and come up with 3 of the MANY reasons that I love Catholicism, and link up with Micaela at California to Korea and Back. 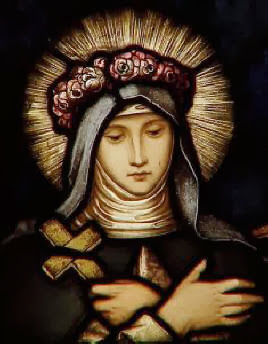 What I have had a hard time with is understanding her practice of extreme mortification. I didn't really want to have a relationship with someone so weird! But recently two things have changed my heart. One is her crown of flowers, which she always wore to hide the silver crown of thorns that she wore underneath as a penance. I came to see that I need to put on "a crown of flowers" if I am suffering in any way or in the throes of extended prayer for a serious issue. Santa Rosa's crown of flowers is a powerful image to remind me to be aware of how I'm coming across to others.

The second thing that happened to change my heart was that the other day while at adoration I was reflecting on the many instances in which pride has caused me to fall, and it seemed that Santa Rosa showed me that pride was her besetting sin as well. That's why she engaged in the mortifying practices, and I suddenly understood what would cause someone to do that, because at that moment I had been so upset at pride's influence in my life that I was wanting to strike out at it with the same force. I am thankful that I live in a time when extreme mortification is seen as inappropriate, but that wasn't the case in Santa Rosa's time. 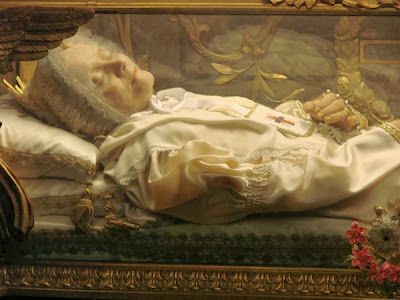 On to Saint number 2: Anna Maria Taigi. Although she is officially only a Blessed, the fact that her body is incorrupt after over 175 years seems to me evidence enough of her holiness. She was the first saint I was led to for prayer support in some things that I was dealing with when I first came into the Catholic Church. If you want to know her story just click on the link. I found her prayer support to be very helpful, and her life to be a great example of humility (goodness knows I can use all the role models and support I can get for that!).

The last saint that I am grateful for today is another person who is in the process to be declared a saint: Solanus Casey. I only recently read his story in the AMAZING book, "Nothing Short of a Miracle", an absolutely REQUIRED read. What a wonderful man! I want his humility! Oh to be a doorkeeper in the house of God...he's someone I know that I have a lot to learn from, and if you know his story, you'll know that he is someone who not only had his prayers answered while he was here on earth, but now that he's in heaven, his prayers are continuing to produce miracles.

What a blessing to have these elder brothers and sisters to learn from and receive support from! Thank you, Father, for adopting us into Your FAMILY!

PS - don't forget to hop on over to Micaela's blog to read more wonderful things about the Catholic Church!