I've had la gripa (a cold) for the past week so I've been pretty fuzzy-headed, not up to thinking in a straight line. I've been saving what little energy I've got for the necessary chores: water the plants, feed the dogs, cook dinner.

But I'm starting to feel the lack of being "in the conversation" with other people, and perhaps my family is wondering whether I dropped off the map, so here's a quick update on what's been happening here at Casa Dulce the past week. 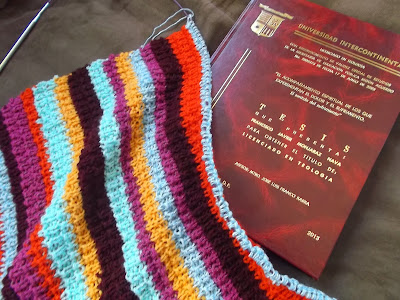 KNITTING. I've been doing the "Follow your Arrow" knit-along that Ginny told us about, but I paused at the end of the 3rd clue because I wanted to see whether I should try to increase the size of the shawl in section 4, or whether section (clue) 5 would offer a version for those of us who like LARGE shawls. So instead I started working on an afghan for the daybed on the terraza upstairs (shown in the photo above).

READING. As I mentioned last week, I'm kind of startled at how many markers I've put in the book I've been reading, "An Unexciting Life". So until I can work some of them out of a job by putting down my thoughts on blog posts, I don't want to continue with that book. Instead, I've been reading our priest's doctoral thesis which I had asked him for. The topic is spiritual direction for those who are experiencing suffering, and it's really a great read. Even though it's in spanish, he writes very clearly and I'm having no problem following what he says.

I also just downloaded a book on sayings of the Desert Mothers, including those of Syncletica, who I wrote about last week.

COOKING. We just cut down a large bunch of plantains from one of our plants, so I decided to cook some of them while they were still green. Plantains (and bananas) are weird - they only ripen once they've been cut down. 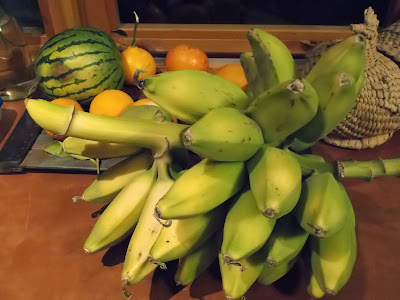 And green (unripe) plantains are used in cooking as a carbohydrate. There are numerous recipes for green plantains, and the one that I tried this week is called "aranitas" (little spiders): 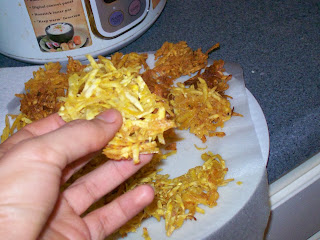 But by the evenings my mind has been so spaced out that I can't focus on reading, so I've been watching:
1. videos from Franciscan University on various subjects
2. Wimp (this is the ultimate feel-good source of short videos on random subjects)
3. Bored Shorts (these are addictive!)

And finally, here are some photos of the little house across the road that we bought, and the current state of the remodel that we're doing on it. We added a third room, which will be another bedroom. The guys are currently putting up rafters of pine logs, which is typical for old ranch houses around here.
BEFORE: 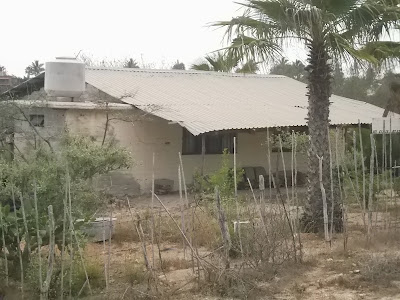 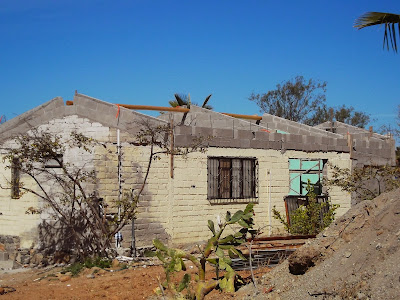 NEW ROOM (on the other side of the house): 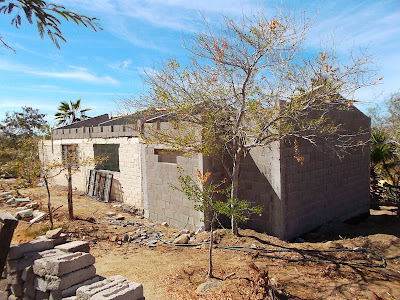 And that's all she wrote! (for today, anyway).