So, my non-Catholic family and friends might ask, what's with giving all this attention to dead saints, anyway? After all, all God's people are saints [definition: those who have been set apart]. Well, yeah, but I personally don't find that all God's people make good role models. The people that the Catholic Church has officially declared as saints are held up as role models for the rest of us who need real-life examples of how to be disciples.

As an aside, the Catholic Church does NOT consider only those who have been named as saints to BE saints. The Church's assumption is that there are MANY people who have been extraordinarily good role models of what it means to be a disciple, but the mechanism for having official recognition is cumbersome and expensive, so not everyone who deserves that official recognition gets it…not because the Church doesn't think they're worth it, but every cause for official sainthood needs a group of people committed to the investment of time and energy into advocating for that cause.

So anyway, who are the saints that I have found most helpful as role models? Since I already did one linkup on my favorite saints here, I'll reach a bit further to saints that I'm intrigued by but haven't really bonded to yet. 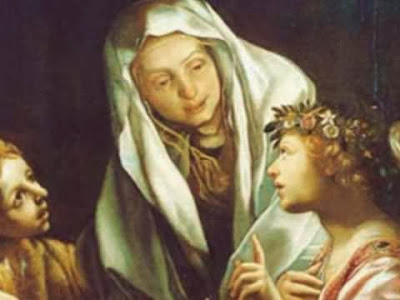 SAINT FRANCES OF ROME. I'm really attracted to her because she had a long and happy marriage (40 years!) and also was able to serve the poor of that large city in a substantial way through the wars and pestilences of the 15th century, to the point where she was mourned by the whole city at her death. What struck me the most in her biography is what her husband told her on his deathbed: "I feel as if my whole life has been one beautiful dream of purest happiness. God has given me so much in your love." That is my heart's greatest desire - to be a wife like that. For a more detailed bio, click here. 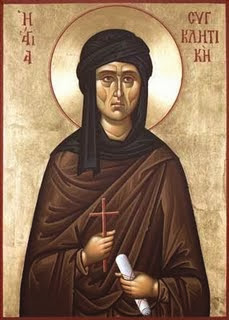 SAINT SYNCLETICA. She is the best known of the Desert Mothers - women who withdrew from the corruption of the contemporary culture in order to focus on living solely for God. They, like the Desert Fathers, lived primarily the 3rd and 4th centuries and the communities that grew up around them were the first expressions of monasticism. For me she is a model of the older woman of faith who can - and does - teach the younger. Many of her wise sayings have been preserved, such as this one: "There is an ascetism that is determined by the enemy and his disciples practice it. So how are we to distinguish between the divine and royal asceticism and the demonic tyranny? Clearly through the quality of balance." For more of her wisdom, click here. 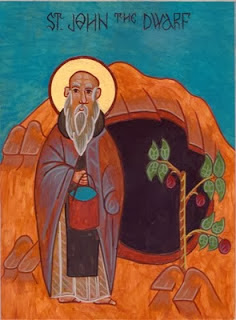 ST. JOHN KOLOBUS. One of the desert hermits who lived in the 4th century. 'Kolobus' apparently means 'dwarf', which he was. Through much experience he learned to be gentle and humble. To test him in his humility, his spiritual director ordered him to water a walking staff stuck in the sand, which he did faithfully. It blossomed and John Kolobus called it "the tree of obedience". I love that his physical stature reflected the inward state of smallness that is so important for those who want to enter the kingdom of God. There was nothing flashy or important or special about him, except that he is a great example of one who learned humility. for more info, click here.

And for more stories about great role models for us as we stumble forward toward God, click here to get to Micaela's blog, California to Korea and back again.